Custom File Icons. This version comes with some serious eye candy. Windows can assign icons to file types, but here are new icon tricks that go much further: Assign custom icons to all folders with a certain name, e.g. "movie" or "docs", or on a certain drive. Assign custom icons to particular files, e.g. to "C:\pagefile.sys", or to all files called "readme.txt", or to all JPEGs containing "2013" in the name.

Here is a shot of a small folder containing some images and sounds from Brazil and Japan in various formats (JPEG, PNG, MP3) using the dull standard icons: 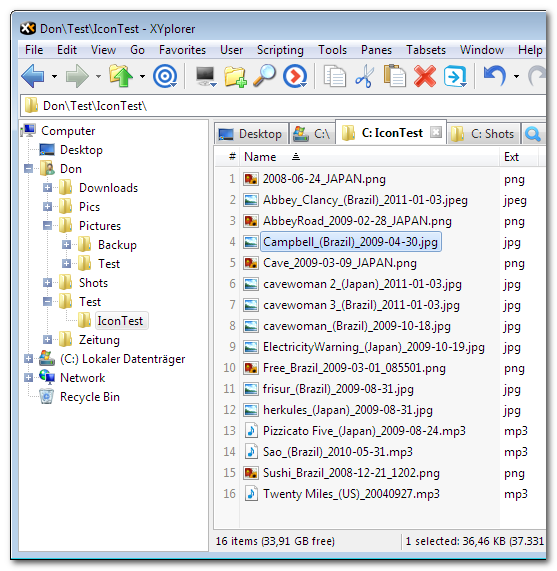 Before: Mixed stuff from Brazil and Japan. Dull icons. (Click to see the full screenshot)

At this point you are rather interested in content than in format, so you want to easily distinguish the Brazil stuff from the Japan stuff. At the same time you are bored of staring at the dull Windows default icons day in day out. Let's handle all of this at once by customizing some file icons. This is what it could look like using custom icons: 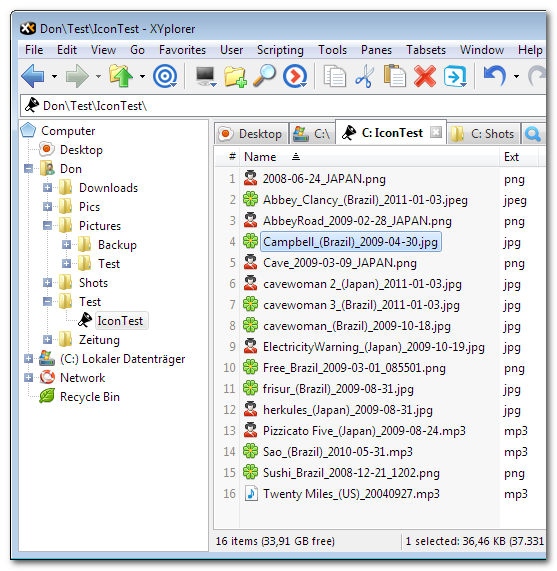 After: Brazil and Japan now nicely distinguished. Charming icons. Note that the assigned icons are used everywhere in the XYplorer UI. (Click to see the full screenshot)

And these are the custom icon definitions responsible for the above look: 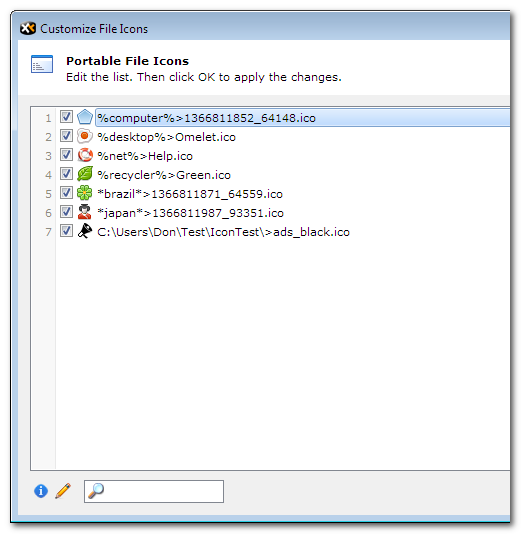 Full Stealth
With Custom File Icons no windows standard icon assignments are touched at all. The icons you see are taken directly from ICO and EXE files present on the host system or on your USB stick. No registry changes involved.

Easily make folders stand out from the crowd: 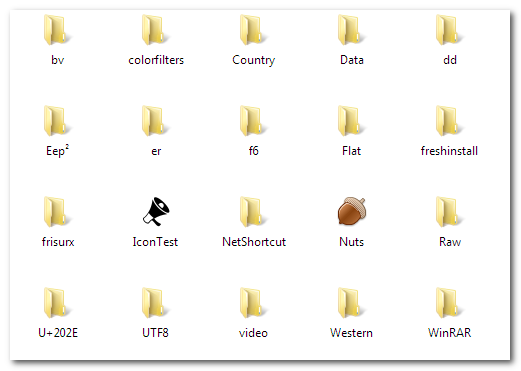 Mark what's important to you and take the marks on the road. They are portable. (Click to see the full screenshot)

Generic folder icons too yellow? Too Vista-ish? No problem, make them blue and XP-like: 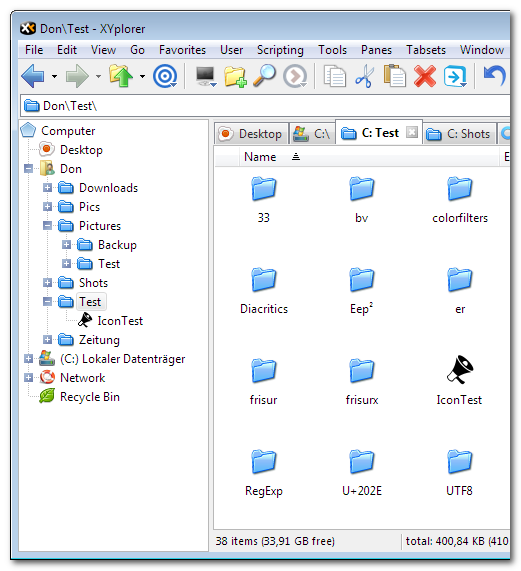 It could be any color, and any shape. (Click to see the full screenshot)

You can as well color folders by their drive and thus give a strong visual clue about the location of a folder. This might save your skin when moving crucial files in a high pressure situation. 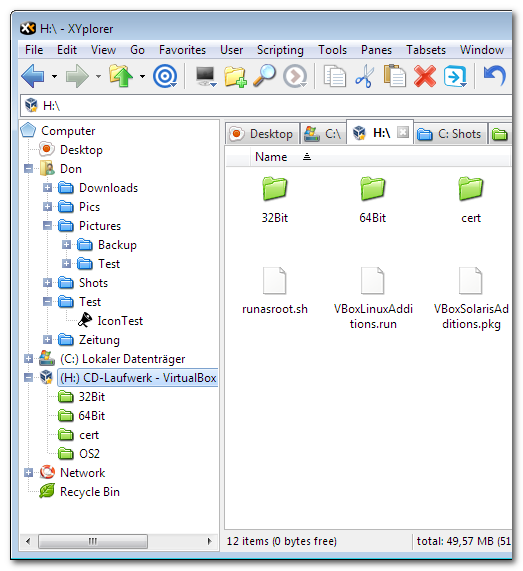 Folders on C: are blue, folders on H: are green. It could be any color, and any shape. (Click to see the full screenshot)

Note that the custom icons are respected everywhere in the XYplorer GUI (which is a difference to Color Filters, which only show in Tree and List), also for example in popup menus: 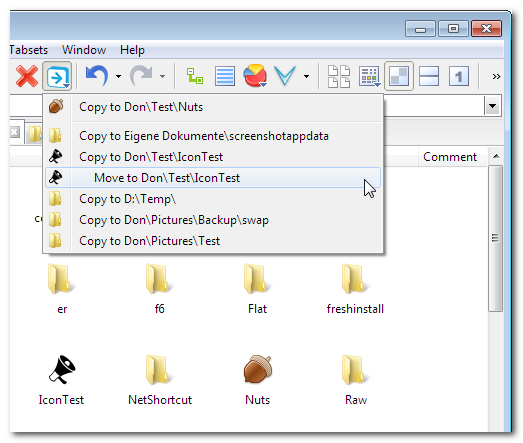 The "Recent File Operations" menu respects the custom icons, just like any other place within XYplorer. (Click to see the full screenshot)

Here's how to make the current tree folder stand out:

Always know where you are, without even looking.


How to Customize Your File Icons

Open menu Tools | Customize File Icons... (Ctrl+I) (Shift+Alt+F9 from v17.00 onwards) and add the desired definitions. The general syntax for a definition looks like this:

Anything that has a system icon (the icon shown in the file list) can be stated as custom icon source, typically you would take either executables or *.ico files. The icon source can be stated as full path, relative path, or ProgID ("Notepad"). Even XYplorer native and environment variables are supported. Paths to icon sources are resolved relative to XYplorer's Icon path, subfolder of the application data path.

Customizing file icons is a one-time job. Once you have customized your icon associations there is nothing else to do or to learn. The feature is simply there for you and works for you. All you have to do is sit and watch. As simple as TV.

For details and advanced options please see the Help file.

A Bunch Of Useful Patterns That Will Start You Off

Here are some icons for testing (including all icons used in the above examples). For all I know these icons are free for commercial and uncommercial use. Thanks and credits go to the designers of these icons!

In XYplorer, go to the default icons path (simply paste <xyicons> into the Address Bar and go there), and paste the extracted icons into this path.

Once again: With Custom File Icons no windows standard icon assignments are touched at all. The icons you see are taken directly from ICO and EXE files present on the host system or on your USB stick. No registry changes involved.
There is a master switch to toggle the whole thing on and off: Configuration | Refresh, Icons, History | Icons | Enable custom file icons.
Changing icon definitions or enabling/disabling the feature all works smoothly, ultra-fast, and on the fly. No restart required.

Custom File Icons. Now you can customize the icons of the currently selected tree folders.

The open state icon is only shown in the folder tree. Its typical use is to make the selected folder stand out from the crowd.

The following examples show how three drives with identical folder structures can be visually set apart by custom icons, and additionally show drive-specific icons for the selected folder: 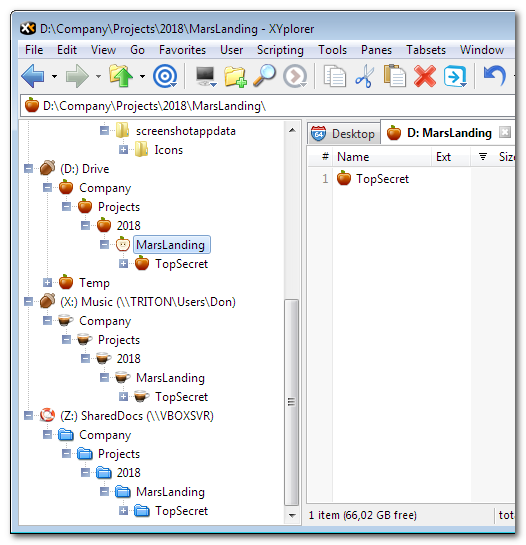 Watch the "half apple" icon of the selected tree folder. (Click to see the full screenshot) 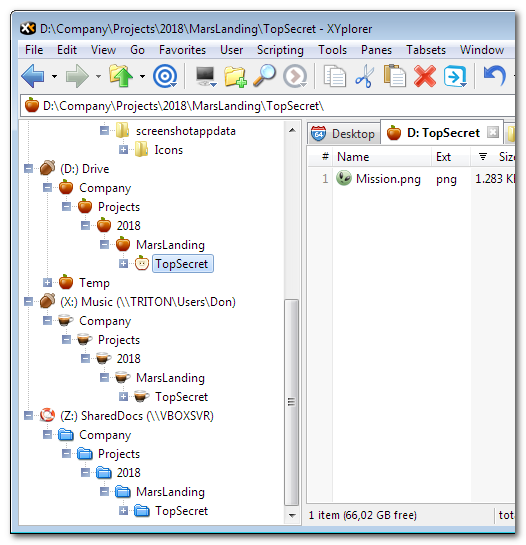 The "half apple" icon moved to the new selected tree folder. (Click to see the full screenshot) 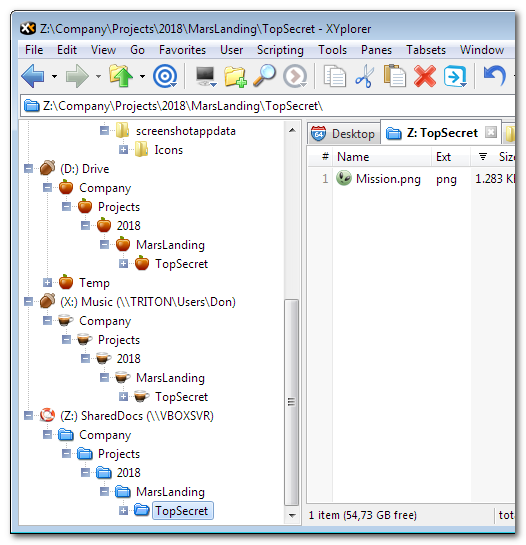 Clearly we are not on the "apples drive" anymore. (Click to see the full screenshot)


How to Define Custom Icons for Selected Tree Folders

The icon to be used for the selected folder is appended to the normal icon, separated by a "|" (pipe). The following definitions are used in the screenshots above: 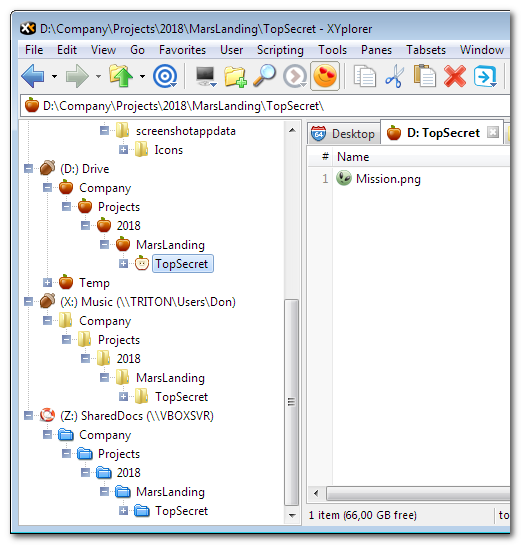 Custom File Icons ON. In the screenshot the button is located below the Tools menu. (Click to see the full screenshot) 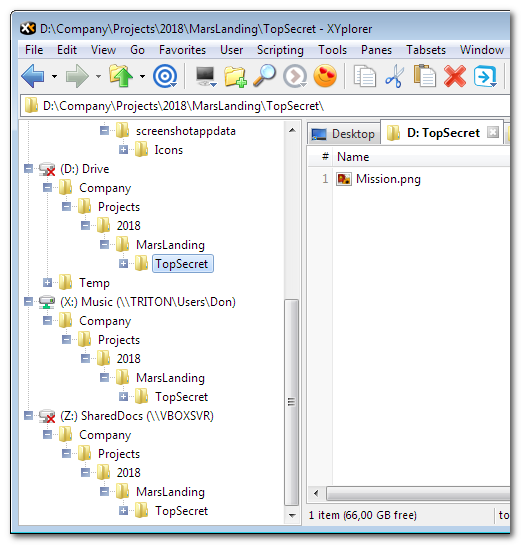 Custom File Icons OFF. (Click to see the full screenshot)

Note that the button's right-click menu has some useful stuff.

Credits for the icon go to http://www.everaldo.com/.

File Times in UTC. Now you can show all file times in UTC (Coordinated Universal Time), i.e. in the universal time format that is independent of your current time zone.

Universal Time Stamp. Now you can as well modify the UTC file times (as they are stored under NTFS) directly: Simply append a "Z" (UTC marker according to ISO 8601) to the time string, e.g. "2013-05-16 12:00:00Z". That way you can guarantee the same universal timestamp regardless of any DST (Daylight Saving Time) offset in effect. Very nice for software developers with a global market.

Universal Time Search. Now you can as well find files by their UTC timestamps. In other words, your search-by-date templates now are perfectly portable and work reliably independent of the time zone of your current host system.